BlakLight releases debut album, Music in a Time of Uncertainty

The debut album from BlakLight is out today. You can find it on Bandcamp and Spotify.

On Facebook, the band writes, “It’s hard to believe that we started this project only nine months ago, and here we are with our first album, and another already in the works.”

Given that the album was written and composed during the troubled times we all experienced in 2020, the songs carry the weight of social isolation, despair, and longing. Lines like “I hear echoes in this empty room” and “Don’t you feel incomplete” capture that sense of emptiness that many of us felt this year.

I am especially drawn to a track called “The Sound” that has a slight beeping synthline pulsating in and out of the song and some of the strongest lyrics on the album. “In shadows of violence, we can’t live in silence” feels particularly poignant to me, a call to stand up to injustice. The song’s chorus, “We’re looking for the sound,” has a poetic ring to it that demands the listener decide what “the sound” means to them.

That combination of rich emotions, sharp synths, and themes that capture the year we faced make this an outstanding debut.

One of the year’s best new synthpop bands, BlakLight, has unveiled details of their debut album. It’s called Music in a Time of Uncertainty, and it will be out Friday, November 20.

You can pre-order Music in a Time of Uncertainty on Bandcamp.

I really love this band. Their debut single, “Isolation,” captures the loneliness of living through coronavirus and our longing to feel another’s touch, but they do so in a way that feels timeless. It’s one of my favorite songs of the year.

BlakLight followed up “Isolation” with second single, “Unknown Love,” another song filled with longing. You can also hear a third track from the album on their Bandcamp page.

BlakLight are based in Los Angeles and comprised of vocalist Brian Belknap from Mind Machine and programmer Adam Collier from Crush333, MDA, and Full Frontal Disco.

Here’s the complete tracklisting and cover art for Music in a Time of Uncertainty. They’re in the running for cutest album cover of the year. 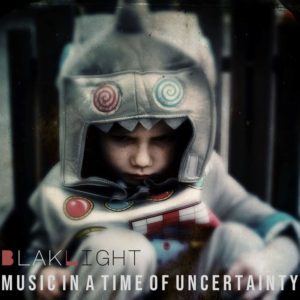