Fatigue is one of my favorite new artists of the year. The electronic music project from Massachusetts-based DJ Lillian Edith Martin caught my attention in January when she released an energetic track called “Slavering.” It was my number one synthpop song in January.

I expected to be dancing to “Slavering” all year long, but unfortunately the coronavirus pandemic and subsequent bar closings prevented the song from getting much club play. None of that stopped Lillian from moving forward with Fatigue. She finished recording her debut album, albeit with fresh perspectives informed by the health crisis.

Illusory Things will be out on Bandcamp on August 7 and on other platforms in the following weeks. I had the chance to talk to Lillian about missing the club scene, making her debut album, and finding inspiration for some of her songs. 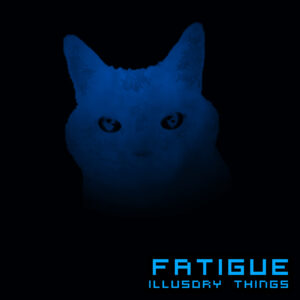 First off, how has the coronavirus pandemic impacted you and how are you getting through it?

It’s pretty rough. I’ve only just recently begun feeling the loneliness and stir-craziness that other people have been going through much earlier in the pandemic.

This was going to be the year that I sought to start playing live shows as Fatigue, and COVID tossed all that out the window. (My first show would have been in May in my homebase of Lowell, Massachusetts.) But I’m managing as best I can.

You’re also a DJ in New England. How did you get involved in the goth-industrial scene?

I was interested in industrial music as early as high school but on a surface level of sorts. Lots of Nine Inch Nails, Rammstein, Marilyn Manson, Rob Zombie, and thrash-era Ministry, all of which tied into the frankly embarrassing nu-metal phase I went through in high school. As I went to college my tastes diverged and I subsequently lost interest in nu-metal and foolishly thought that meant I’d have to stop liking industrial as well.

But that love was re-kindled the first time my brother’s partner took me to the now-defunct goth night Jaded in Lowell, which not only hooked me back in, and not only introduced me to new artists I never would have previously known existed, but put it into a dance-club context. It all fell into place from there. (I have my brother, who DJs electro-house under the moniker DJ Bad Axe, to thank for everything I’ve come to know about how to spin.)

Your DJ moniker is Sawtooth, but you’ve chosen Fatigue for this project. Is there any significance to the name Fatigue?

I’ve always felt like a good band name should be straight and to the point, and the word “Fatigue” feels like just the right word to convey the kinds of songs I wanted to write about. The goth/industrial scene doesn’t have a lot of artists writing about the mentally exhausted subject matter I’ve found myself occasionally drifting into, and I feel like the word stands out in that regard.

I also picked it because I assumed it was an obscure enough word that I wouldn’t be sharing it with other artists and making things confusing. (I’ve always had that problem trying to name other bands I’ve been a part of.) That didn’t quite work out though: I’ve recently discovered there’s a rapper also called Fatigue.

Which might mean we absolutely have to collaborate in the future should we ever meet.

“Slavering” is one of my favorite tracks of the year, and I suspect it would be getting a lot of club play if clubs were open. I miss clubs so much. Illusory Things is not just a club album though, there are a lot of different tempos. Is any of that a reaction to clubs being closed?

I miss clubs too, immensely. I would say a large portion of the songs on Illusory Things are a reaction not just to the clubs being shut down, but to the pandemic in general. Half of the songs (the more depressed and miserable half) were written while I was recovering from thyroid surgery last year, while the other half (the most detached and cynical side) were written in the earliest stages of Massachusetts’ stay-at-home advisory, in reaction to all of the unease, misinformation, and havoc that ensued as we collectively lost our minds.

On the new album, I also hear a lot of variety in instrumentation and styles. What was your intention with the album?

There is a variety of styles and arrangements, but I don’t think I had any intention behind it beyond my own obsessive need not to allow the same kind of song to happen too frequently. That’s how I’ve always written songs.

Track one on the album is called “Outro,” which caught my attention. Later, you sing “Oh structure, won’t you save me,” and several tracks have nice, unexpected structural changes like the beat in “Bleach.” Is defying expectation something you try to do intentionally in your music?

Absolutely. I love to lampshade and turn tropes on their head. Some of my favorite artists like Sparks and They Might Be Giants excel at making bright and peppy-sounding songs about dark and disturbing subject matter, and I eat that sort of songwriting up like popcorn.

Eric Oehler from Null Device and Klack contributes some instrumentation. Which track is he on, and how did that come about?

He performs the violin solo on “No Funeral.” His contribution came completely by chance, but I’m very happy for it because his performance absolutely makes the emotional core of the song.

In the early stages of the pandemic when people were just looking for means to occupy their time, I got invited into a group specifically for artists to collaborate with each other, populated with a regular who’s-who of industrial and synth artists. I had “No Funeral” arranged up to this point, but I felt like a string solo (violin, viola, cello, etc) would have really tied the whole thing together, and Eric just happened to be one of the few people who not only answered my request but followed up on it. He got the track back to me in a few weeks, it sounded fantastic, and he scolded me for writing a song in G# minor. (All in good fun, of course.)

“Trapt” is one of the stand-out tracks for me on Illusory Things. Part of the hook is “You shouldn’t have done that.” Is that song about a specific incident?

Trapt started out as a very straight-forward song literally referring to the band, who have really made a total mockery of themselves during this whole situation. (“You shouldn’t have done that” being a literal reference to every time the lead singer would make a fool of himself on Twitter.) It gradually evolved into a track about a more general steadfast refusal to grow or mature in the face of crisis (as a lot of people have been doing in refusing to drop their own self-interest so we can get through this thing faster) and how this inability to change and adapt will eventually lead to their abandonment.

Or at least that’s what I had going through my head at the time. I have specific thoughts running through my brain when I write music, but I like to believe there are no “correct” interpretations of my songs. (But plenty of wrong ones, though.)

What other themes did you explore when writing the album?

The phrase I’ve been relying on to sum the album up, and this is also on the BandCamp description for it, is: “Songs of mortality, identity, unrest, societal collapse, and bitterly dancing on the ruins out of spite.”

How does your trans identity inform your music?

It’s a core part of my being, so of course it’s going to inform the songwriting, as well as into any songs dealing with my own neuroses. There’s all kinds of interpretable references throughout as well as tracks “Steal My Body” which isn’t even subtle about it, containing references to The Matrix (Itself an allegory for trans identity) and the hormonal drug spirolactone.

Have you ever experienced any discrimination or transphobia from the goth-industrial scene?

Happily, I haven’t. I’m only intimately familiar with the scenes in New England and upstate New York, and they’ve both been absolutely wonderful. If anything they’ve been integral to my transition for the amount of patience and support they’ve shown.

What could the goth-industrial scene do better for trans and other marginalized people?

I don’t know if I have a specific answer for that, except to say that subcultures can always be doing better for marginalized people. I feel like the bare minimum that DJs and promoters can be doing is to highlight bands and artists from oppressed groups, and I feel like the corest of the core of industrial’s scene has gotten a lot better about that sort of thing in recent years. There’s been a lot done to force the genre to evolve beyond the trashy macho-misogynist days when Combichrist was the word of the day, and it’s a lot better for it in terms of variations of sounds and subject matter.

There’s always more that can be done though.