Beyond Border is the best new synthpop band of 2020

There was no shortage of outstanding new artists who made their debut in 2020. You’ll be seeing many of them on my upcoming best songs and albums lists.

But there was one particular artist who grabbed my attention at the start of the year and kept me engaged all year long. That band is Beyond Border, a new synthpop project from Hildesheim, Germany.

Beyond Border burst onto the scene in early 2020 with a collection of club-friendly anthems like “Neurotic” and “Enjoy Your Life.” They followed those with an absolute banger called “Construction” and an energetic cover of the Visage classic “The Damned Don’t Cry.” Then near the end of the year, they announced a collection of unreleased material called B-Sides Love Live & Others. Remarkably, they have yet to release a full-length debut.

I have no doubt that there are big things in store for Beyond Border, especially when clubs and concert halls reopen next year (fingers crossed). The guys in Beyond Border were gracious enough to answer a few questions I had for them via email. Note that their responses are translated from German, so please forgive any grammar or syntax errors.

Let’s start by introducing yourselves. What are your names and backgrounds, and what made you decide to start Beyond Border? 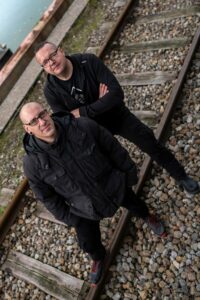 We are Kai “Iggi” Németh (voice) and Michael “Deity” Deiters (music). Kai has been making music with In Good Faith for years, and I was a DJ in a trendy club in Hanover for years.

We have had many stars of the scene as guests and DJs in the club over the years, and friendships have developed from this. This started around the turn of the millennium, and the music from those years is also the basis for the Beyond Border sound. I’m originally more from the AOR/Hard&Heavy area and a child of the ’80s, while Kai has always listened to electro, techno, and also the ’80s. We enjoy a wide range, which is why we want to think beyond categorical limits.

We deliberately chose our first songs to be catchy, but gradually more bulky songs and formats will follow, which should go beyond the typical scene without losing the actual Beyond Border sound. It is and remains exciting.

I didn’t know Kai before, but I had heard his voice. At a Depeche Mode party, he performed with his band In Good Faith, and I spoke to him about working together. He said okay, and one day later I sent him demos. That’s how it started over three years ago.

Was there a particular moment when you realized you had something special?

Shortly after we worked on the first pieces, a tragic accident happened in Kai’s life. His beloved brother, with whom he shared a house, no longer wanted to be part of this world. Kai found his own brother hanged and has since lost a part of himself.

When I found out about it that day, I decided to write a memorial song for Mark (that’s his name), although I never met him. The song is called “Where Are You,” and it’s our most emotional song. It appeared for the first time on the First Contact EP, and there’s now a live version on B-Sides Love Live & Others.

That’s your most recent release?

Yes, B-Sides Love Live & Others is our current release, which came on the market as a limited-edition mega-fan box and was actually virtually sold out before delivery. The songs will be offered to fans worldwide for a while, then also on the usual platforms, as otherwise we would not be able to reach many people at the moment. At concerts, if there are any, we will still be able to offer a few CDs.

We think of the EP (even though it has the running length of an LP) as a gap-filler before the album. We wanted to bring a bit of the ’80s feeling, but also deliver a cold aesthetic and a very raw product. The songs were composed within the last three years and have not been used to date. They probably would not be on an album as they are not cohesive and don’t have the pure sound quality one would expect for an album. But they reflect the facets of Beyond Border and the quality of Kai’s voice live.

I think a lot of your music would be played in clubs, which have been mostly closed this year. What was it like to debut an electro project during a global pandemic, and has it changed your approach to making music?

Clubs are a benchmark for many bands from our scene, and I’ll be honest it’s a great feeling to hear your song played loud while others dance to it. We did get a little foothold in the clubs. “Enjoy Your Life” and “Stand” were played here and there, and we received videos from DJs in Germany, Switzerland, the USA, and England who filled the dance floors with our songs.

The pandemic is a huge setback for all artists and participants, but it’s also a chance for a new band to advance with the next wave. From there we’ll move on… why should we stop now?

I’m writing songs permanently. I already have enough for three albums, and I will now select and work on them with Kai and our producer Vasi Vallis (from Frozen Plasma and Future Lied to Us).

You’ve recorded about a dozen songs already. If you had to pick one song as the essential Beyond Border song, which one would it be and why?

The already mentioned song “Where Are You.” It’s just particularly emotional, quiet, loud, dirty, clean, synthetic, analog, and honest. The live version shows this very clearly. Kai’s scream tears everyone out of their bubble and pulls them into his spell. I’m scared every time, positively speaking, even though I know what’s going on.

What’s next for Beyond Border?

As already mentioned, there is no real debut album from Beyond Border yet. To date, we have not yet been listed on a label, so we have no possibility to be sold in retail, and we have only been able to give two concerts (with Rotersand and Clan Of Xymox). There are still no performances happening, especially at festivals. We have a lot planned, once everything finally starts again.

For the first time, we are constantly working on our debut album. It currently has the working title Triage because it would be the first album of three CDs. The first track bears the name “What Makes the World Go Round” and should appear in the spring of 2021. It’s a rather typical Beyond Border dancefloor song with remixes and another live piece, plus a little surprise. It should be a “real” album, which one can listen to in one piece, without feeling monotonous.

I don’t want to give away too much!