System Syn releases new album, Once Upon a Second Act

System Syn has released his latest album, Once Upon a Second Act. It’s very emotionally driven synthpop. There are several ballads and mid-tempo pieces. Track six, “Weightless,” is carried by beautiful piano music.

You can find Once Upon a Second Act on Bandcamp and Spotify.

Los Angeles-based electronic project System Syn has a new album on the way. Once Upon A Second Act will be released on June 26.

Clint Carney, the artist behind System Syn, says it’s his best album to date. The title may be a reference to a new start of sorts for the musician. He’s left long-time label Metropolis Records and will be releasing the new album independently.

I’ve been listening to System Syn for years, and he has so many great tracks. Some of my favorites are “Like Every Insect,” “Here’s to You,” and “I Am Here.”

We last heard from System Syn in 2019, when he released a soundtrack for the horror movie Dry Blood that was full of eerie, cinematic music. But his last song-based album, No Sky to Fall, came out way back in 2013. It included the fantastic song “Daydream from a Deathbed.”

I love the neon glow in the promotional images for Once Upon A Second Act. The album cover recalls the heart on the cover of System Syn’s excellent 2008 album, End. I’m really looking forward to this release. 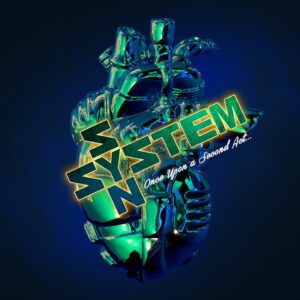