Preview the upcoming double album from My Love Kills

Emerging electro act My Love Kills is getting ready to release its second album, Imitatio Dei, in April. It’s a massive double album featuring 19 new songs. You can get a taste of it below.

The album’s title is a Latin phrase that means “Imitation of God,” a theological concept describing man’s obligation to imitate god. The album cover features religious imagery, and several tracks name-check religious subjects like Babylon and purgatory. Should be interesting. 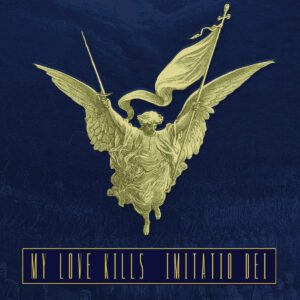 Imitatio Dei will be out digitally on April 21, 2020. Physical copies of the double CD ship out around April 14. You can pre-order it here.

Here is the complete tracklisting:

Listen to 3 tracks from Imitatio Dei

So far, we’ve heard three songs from Imitatio Dei, including the excellent lead single, “Silent Scream,” which was released with a lyric video on Youtube. The other two preview tracks, “La Voisin” and “Embrace the Curse,” are available for immediate download at Bandcamp when you pre-order the album.

Listen to the Kingdom of Lost Souls EP

My Love Kills has released another teaser from their upcoming album, Imitatio Dei. It’s a 3-track EP called Kingdom of Lost Souls.

You can find it on Bandcamp and Spotify.

5 ways to support your favorite artists during coronavirus